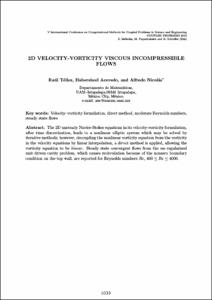 Show full item record
Téllez, Raúl
Acevedo, Habersheel
Nicolás, Alfredo
Document typeConference report
PublisherCIMNE
Rights accessOpen Access
All rights reserved. This work is protected by the corresponding intellectual and industrial property rights. Without prejudice to any existing legal exemptions, reproduction, distribution, public communication or transformation of this work are prohibited without permission of the copyright holder
Abstract
The 2D unsteady Navier-Stokes equations in its velocity-vorticity formulation, after time discretization, leads to a nonlinear elliptic system which may be solved by iterative methods; however, decoupling the nonlinear vorticity equation from the vorticity in the velocity equations by linear interpolation, a direct method is applied, allowing the vorticity equation to be linear. Steady state convergent flows from the un–regularized unit driven cavity problem, which causes recirculation because of the nonzero boundary condition on the top wall, are reported for Reynolds numbers Re, 400 ≤ Re ≤ 4000.
URIhttp://hdl.handle.net/2117/192676
ISBN978-84-941407-6-1
Collections
Share: