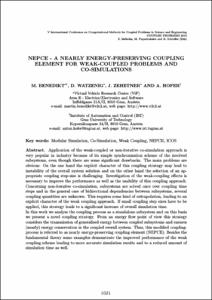 Show full item record
Benedikt, M.
Watzenig, D.
Zehetner, J.
Hofer, A.
Document typeConference report
PublisherCIMNE
Rights accessOpen Access
Abstract
Application of the weak-coupled or non-iterative co-simulation approach is very popular in industry because of its simple synchronisation scheme of the involved subsystems, even though there are some significant drawbacks. The main problems are obvious: On the one hand the explicit character of this coupling strategy may lead to instability of the overall system solution and on the other hand the selection of an appropriate coupling step-size is challenging. Investigation of the weak-coupling effects is necessary to improve the performance as well as the usability of this coupling approach. Concerning non-iterative co-simulation, subsystems are solved once over coupling time steps and in the general case of bidirectional dependencies between subsystems, several coupling quantities are unknown. This requires some kind of extrapolation, leading to an explicit character of the weak coupling approach. If small coupling step sizes have to be applied, this strategy leads to a significant increase of overall simulation time. In this work we analyse the coupling process as a standalone subsystem and on this basis we present a novel coupling strategy. From an energy flow point of view this strategy considers the transmission of generalised energy between coupled subsystems and ensures (nearly) energy conservation in the coupled overall system. Thus, this modified couplingprocess is referred to as nearly energy-preserving coupling element (NEPCE). Besides the fundamental theory some examples demonstrate the improved performance of the weak coupling scheme leading to more accurate simulation results and to a reduced amount of simulation time as well.
URIhttp://hdl.handle.net/2117/192675
ISBN978-84-941407-6-1
Collections
Share: