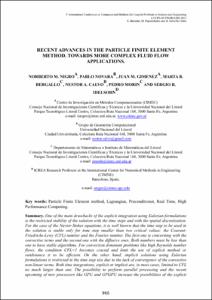 Show full item record
Nigro, Norberto M.
Novara, Pablo
Gimenez, Juan M.
Calvo, Néstor A.
Morin, Pedro
Idelsohn, Sergio R.
Bergallo, Marta B.
Document typeConference report
PublisherCIMNE
Rights accessOpen Access
Abstract
One of the main drawbacks of the explicit integration using Eulerian formulations is the restricted stability of the solution with the time steps and with the spatial discretization. For the case of the Navier-Stokes equations, it is well known that the time step to be used in the solution is stable only for time step smaller than two critical values: the Courant- Friedrichs-Lewy (CFL) number and the Fourier number. The first one is concerning with the convective terms and the second one with the diffusive ones. Both numbers must be less than one to have stable algorithms. For convection dominant problems like high Reynolds number flows, the condition CFL<1 becomes crucial and limit the use of explicit method or outdistance it to be efficient. On the other hand, implicit solutions using Eulerian formulations is restricted in the time step size due to the lack of convergence of the convective non-linear terms. Both time integrations, explicit or implicit are, in most cases, limited to CFL no much larger than one. The possibility to perform parallel processing and the recent upcoming of new processors like GPU and GPGPU increase the possibilities of the explicit integration in time due to the facility to parallelize explicit methods having results with speedup closed to one. Although the incompressible condition cannot be solved explicitly, the solution of the momentum conservation equations with an explicit integration of the convective terms together with a parallel processing reduces considerably the computing time to solve the whole problem provided that a large time-step may be preserved independently to the discretization in space. Only to remember the new Particle Finite Element Method, called PFEM 2nd generation (PFEM-2) uses a Lagrangian formulation with an explicit time integrator without the CFL<1 restriction for the convective terms. This allows large timesteps, independent of the spatial discretization, having equal or better precision that an implicit integration. Moreover, PFEM-2 has two versions, one for moving mesh with permanent remeshing and one for fixed mesh [1]. In this lecture we will present some recent advances in the Particle Finite Element Method (PFEM) to solve the incompressible Navier- Stokes equations coupled with another fields like in multiphysics exploiting some nice features found in the fixed version. On the other hand we will also present the moving mesh version applied to multifluids using a parallel remeshing that makes this efficient in terms of cpu time. This updated proposal will be tested numerically and compared in terms of accuracy as in computing cpu time with other more standard Eulerian formulations.
URIhttp://hdl.handle.net/2117/192668
ISBN978-84-941407-6-1
Collections
Share: