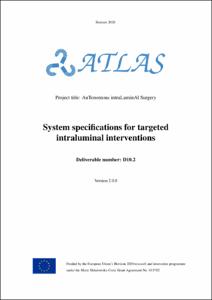 Document typeExternal research report
Rights accessOpen Access
Abstract
This deliverable summarizes the first efforts from the ESRs in designing common demonstrator platforms for developing and testing autonomous intraluminal navigation schemes. Through this endeavour ESRs are encouraged to work accross institutional borders towards a common application target. Thanks to this joint effort ESRs learn to explain their work to peers and are offered the opportunity to learn related technologies in a similar hands-on fashion. The deliverable is the result of these first collaborative efforts. The work is the outcome of the first integration meeting that took place in Leuven, the 22nd of January 2020. The effort in integration will be followed-up during the whole duration of the project and will be reported in subsequent Deliverables 5.2, 5.3, and 5.4. The purpose is that at the end of the project three intraluminal navigation systems initiated here, can be demonstrated to the broader public. The report starts by identifying and describing a specific use case within each of the broader medical scenarios: Colonoscopy and Gastroscopy (C1), Ureteroscopy (C2), and Endovascular Catheterization (C3). The ATLAS deliverable ‘D10.1 Surgical Workflow of Intraluminal Interventions’ formed the base for this selection and the derived description. Then, a vision on an autonomous intraluminal navigation scenario is elaborated and the specifications for the corresponding autonomous intraluminal systems are sketched. All ESRs contributed to this deliverable. The ESRs were asked to work in group to detail their scenario with the greatest care. In a second step each team was asked to critically evaluate the contributions from the other scenarios. Finally, the ESRs received the comments from the other teams and were asked to incorporate the requests for changes or provide additional explanation. By mimicking a typical paper review process ESRs experienced both sides of the publication process. It goes without say that this approach also contributed to the overall quality of the deliverable.
Description
The deliverable summarizes the first efforts from the ESRs (i.e. Early Stage Researchers ) of the Marie Curie ATLAS (i.e. AuTonomous intraLuminAl Surgery) project in designing common demonstrator platforms for developing and testing autonomous intraluminal navigation schemes.
CitationBorghesan, G. [et al.]. "ATLAS : AuTonomous intraLuminAl Surgery : System specifications for targeted intraluminal interventions : version 2.0.0.". 2020.
Is part ofH2020-MSCA-ITN-2018. Deliverable number: D10.2
URIhttp://hdl.handle.net/2117/192644
URL other repositoryhttps://atlas-itn.eu/wp-content/uploads/2020/05/D102_main.pdf
Collections
Share: