How and for what used Vermeer the camera obscura 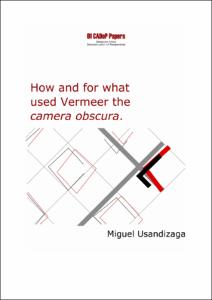 Document typeBook
Publisher[Iniciativa Digital Politècnica. Oficina de Publicacions Acadèmiques Digitals de la UPC]
Rights accessOpen Access
Abstract
Perspective deconstruction (traditionally called “perspective restitution”) is the inverse procedure to the geometrical construction of perspective. This graphical analysis offers promising possibilities if done with a computer and two-dimensional CAD software. Here we use this technique to analyze the perspective in a painting by Johannes Vermeer, The Music Lesson. We compare two different versions of this perspective: the original one and that of the recreation painted by Tim Jenison and presented in the film Tim’s Vermeer. We have especially considered the perspective of the flooring, a grid that requires a lot of precision to draw it accurately. Our conclusion is that Vermeer could not geometrically construct this perspective with the instruments at his disposal in the seventeenth century. Therefore, he had to draw it with the only alternative system known at that time; tracing the image projected in the interior of a camera obscura. This research offers geometrical evidence that Vermeer used a camera obscura to draw the perspectives in his paintings.
URIhttp://hdl.handle.net/2117/192641
Collections
Share: