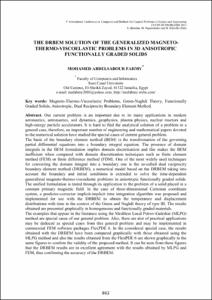 Show full item record
Fahmy, Mohamed Abdelsabour
Document typeConference report
PublisherCIMNE
Rights accessOpen Access
Abstract
Our current problem is an important due to its many applications in modern aeronautics, astronautics, soil dynamics, geophysics, plasma physics, nuclear reactors and high-energy particle accelerators. It is hard to find the analytical solution of a problem in a general case, therefore, an important number of engineering and mathematical papers devoted to the numerical solution have studied the special cases of current general problem. The basis of the boundary element method (BEM) is the transformation of the governing partial differential equations into a boundary integral equation. The presence of domain integrals in the BEM formulation implies domain discretization and this makes the BEM inefficient when compared with domain discretization techniques such as finite element method (FEM) or finite difference method (FDM). One of the most widely used techniques for converting the domain integral into a boundary one is the so-called dual reciprocity boundary element method (DRBEM), a numerical model based on the DRBEM taking into account the boundary and initial conditions is extended to solve the time-dependent generalized magneto-thermo-viscoelastic problems in anisotropic functionally graded solids. The unified formulation is tested through its application to the problem of a solid placed in a constant primary magnetic field. In the case of three-dimensional Cartesian coordinate system, a predictor-corrector implicit-implicit time integration algorithm was proposed and implemented for use with the DRBEM to obtain the temperature and displacement distributions with time in the context of the Green and Naghdi theory of type III. The results obtained are presented graphically in homogeneous and functionally graded materials. The examples that appear in the literature using the Meshless Local Petrov-Galerkin (MLPG) method are special cases of our general problem. Also, there are alot of practical applications may be deduced as special cases from this general problem and may be implemented in commercial FEM software packages FlexPDE 6. In the considered special case, the results obtained with the DRBEM have been compared graphically with those obtained using the MLPG method and also the results obtained from the FlexPDE 6 are shown graphically in the same figures to confirm the validity of the proposed method. It can be seen from these figures that the DRBEM results are in excellent agreement with the results obtained by MLPG and FEM, thus confirming the accuracy of the DRBEM.
URIhttp://hdl.handle.net/2117/192635
ISBN978-84-941407-6-1
Collections
Share: