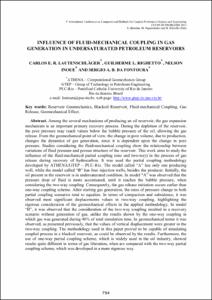 Show full item record
Lautenschläger, Carlos E.R.
Righetto, Guilherme L.
Inoue, Nelson
Da Fontouura, Sergio A.B.
Document typeConference report
PublisherCIMNE
Rights accessOpen Access
Abstract
Among the several mechanisms of producing an oil reservoir, the gas expansion mechanism is an important primary recovery process. During the depletion of the reservoir, the pore pressure may reach values below the bubble pressure of the oil, allowing the gas release. From the geomechanical point of view, the change in pore volume, due to production, changes the dynamics of gas generation, since it is dependent upon the change in pore pressure. Studies considering the fluid-mechanical coupling show the relationship between variations of fluid pressure and porous structure of the reservoir. This work aims to study the influence of the fluid-mechanical partial coupling (one and two-way) in the process of gas release during recovery of hydrocarbon. It was used the partial coupling methodology developed by ATHENA/GTEP – PUC-Rio. The model called “A” has only one producing well, while the model called “B” has four injection wells, besides the producer. Initially, the oil present in the reservoir is in undersaturated condition. In model “A” was observed that the pressure drop of fluid is more accentuated, until it reaches the bubble pressure, when considering the two-way coupling. Consequently, the gas release initiation occurs earlier than one-way coupling scheme. After starting gas generation, the rates of pressure change in both partial coupling scenarios tend to equalize. In terms of compaction and subsidence, it was observed most significant displacements values in two-way coupling, highlighting the rigorous consideration of the geomechanical effects in the applied methodology. In model “B”, it was observed that the consideration of the two-way coupling resulted in a recovery scenario without generation of gas, unlike the results shown by the one-way coupling in which gas was generated during 40% of total simulation time. In geomechanical terms it was observed, as presented previously, that the values of vertical displacement were greater in the two-way coupling. The methodology used in this paper proved to be capable of simulating coupled process in a blackoil reservoir, as could be observed by the results. Furthermore, the use of one-way partial coupling scheme, which is widely used in the oil industry, showed results quite different in terms of gas liberation, when are compared with the two-way partial coupling scheme, which was developed in a more rigorous way.
URIhttp://hdl.handle.net/2117/192628
ISBN978-84-941407-6-1
Collections
Share: