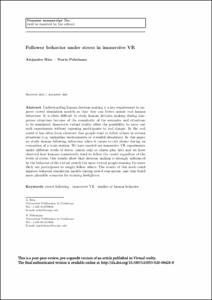 Document typeArticle
Rights accessOpen Access
Abstract
Understanding human decision making is a key requirement to improve crowd simulation models so that they can better mimic real human behavior. It is often difficult to study human decision making during dangerous situations because of the complexity of the scenarios and situations to be simulated. Immersive virtual reality offers the possibility to carry out such experiments without exposing participants to real danger. In the real world, it has often been observed that people tend to follow others in certain situations (e.g., unfamiliar environments or stressful situations). In this paper, we study human following behavior when it comes to exit choice during an evacuation of a train station. We have carried out immersive VR experiments under different levels of stress (alarm only or alarm plus fire), and we have observed how humans consistently tend to follow the crowd regardless of the levels of stress. Our results show that decision making is strongly influenced by the behavior of the virtual crowd: the more virtual people running, the more likely are participants to simply follow others. The results of this work could improve behavior simulation models during crowd evacuation, and thus build more plausible scenarios for training firefighters.
CitationRios, A.; Pelechano, N. Follower behavior under stress in immersive VR. "Virtual reality: research, development and applications", Desembre 2020, vol. 24, p. 683-694.
URIhttp://hdl.handle.net/2117/192616
DOI10.1007/s10055-020-00428-8
ISSN1359-4338
Publisher versionhttps://link.springer.com/article/10.1007/s10055-020-00428-8
Collections
Share: