Arnold Hauser, Walter Benjamin and the mythologization of history 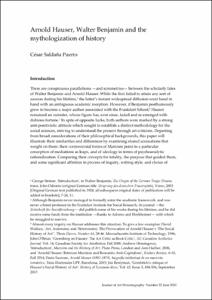 Document typeArticle
Rights accessOpen Access
Abstract
There are conspicuous parallelisms —and symmetries— between the scholarly fates of Walter Benjamin and Arnold Hauser. While the first failed to attain any sort of success during his lifetime, the latter’s instant widespread diffusion went hand in hand with an ambiguous academic reception. However, if Benjamin posthumously grew to become a major author, Hauser remained an outsider, whose figure has faded and re-emerged with dubious fortune. In spite of opposite lucks, both authors were marked by a strong anti-positivistic attitude which sought to establish a distinct methodology for the social sciences, striving to understand the present through art criticism. Departing from broad considerations of their philosophical backgrounds, this paper will further illustrate their similarities and differences by examining shared accusations that weight on them: their controversial forms of Marxism point to a conception of art criticism that handles historical narrative as myths, rendering their methods close to psychoanalytical dream interpretation.
CitationSaldaña Puerto, C. Arnold Hauser, Walter Benjamin and the mythologization of history. "Journal of Art Historiography", Juny 2020, vol. June 2020, núm. 22, p. 1-30.
URIhttp://hdl.handle.net/2117/192587
ISSN2042-4752
Publisher versionhttps://arthistoriography.files.wordpress.com/2020/05/saldana.pdf
Other identifiershttps://www.academia.edu/43247457/Arnold_Hauser_Walter_Benjamin_and_the_mythologization_of_history
Collections
Share: