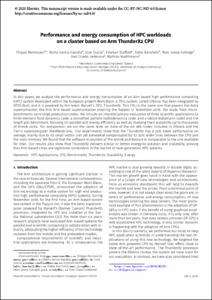 Except where otherwise noted, content on this work is licensed under a Creative Commons license : Attribution-NonCommercial-NoDerivs 4.0 International
ProjectMONT-BLANC 2 - Mont-Blanc 2, European scalable and power efficient HPC platform based on low-power embedded technology (EC-FP7-610402)
COMPUTACION DE ALTAS PRESTACIONES VII (MINECO-TIN2015-65316-P)
MONT-BLANC - Mont-Blanc, European scalable and power efficient HPC platform based on low-power embedded technology (EC-FP7-288777)
Mont-Blanc 3 - Mont-Blanc 3, European scalable and power efficient HPC platform based on low-power embedded technology (EC-H2020-671697)
POP2 - Performance Optimisation and Productivity 2 (EC-H2020-824080)
HBP SGA2 - Human Brain Project Specific Grant Agreement 2 (EC-H2020-785907)
BARCELONA SUPERCOMPUTING CENTER - CENTRO. NACIONAL DE SUPERCOMPUTACION (MINECO-SEV-2015-0493)
Abstract
In this paper, we analyze the performance and energy consumption of an Arm-based high-performance computing (HPC) system developed within the European project Mont-Blanc 3. This system, called Dibona, has been integrated by ATOS/Bull, and it is powered by the latest Marvell’s CPU, ThunderX2. This CPU is the same one that powers the Astra supercomputer, the first Arm-based supercomputer entering the Top500 in November 2018. We study from micro-benchmarks up to large production codes. We include an interdisciplinary evaluation of three scientific applications (a finite-element fluid dynamics code, a smoothed particle hydrodynamics code, and a lattice Boltzmann code) and the Graph 500 benchmark, focusing on parallel and energy efficiency as well as studying their scalability up to thousands of Armv8 cores. For comparison, we run the same tests on state-of-the-art x86 nodes included in Dibona and the Tier-0 supercomputer MareNostrum4. Our experiments show that the ThunderX2 has a 25% lower performance on average, mainly due to its small vector unit yet somewhat compensated by its 30% wider links between the CPU and the main memory. We found that the software ecosystem of the Armv8 architecture is comparable to the one available for Intel. Our results also show that ThunderX2 delivers similar or better energy-to-solution and scalability, proving that Arm-based chips are legitimate contenders in the market of next-generation HPC systems.
CitationMantovani, F. [et al.]. Performance and energy consumption of HPC workloads on a cluster based on Arm ThunderX2 CPU. "Future generation computer systems", Novembre 2020, vol. 112, p. 800-818.
URIhttp://hdl.handle.net/2117/192471
DOI10.1016/j.future.2020.06.033
ISSN0167-739X
Publisher versionhttps://www.sciencedirect.com/science/article/abs/pii/S0167739X19309781
Other identifiershttps://arxiv.org/abs/2007.04868
Collections
Share: