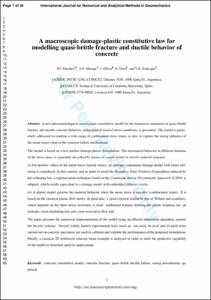 Díaz, G.
Sonzogni, Victorio Enrique
Document typeArticle
Rights accessOpen Access
Abstract
A new phenomenological macroscopic constitutive model for the numerical simulation of quasi-brittle fracture and ductile concrete behavior, under general triaxial stress conditions, is presented. The model is particularly addressed to simulate a wide range of confinement stress states, as also, to capture the strong influence of the mean stress value in the concrete failure mechanisms. The model is based on a two-surface damage-plastic formulation. The mechanical behavior in different domains of the stress space is separately described by means of a quasi-brittle or ductile material response: (i) For positive values of the mean stress (tensile states), an isotropic continuum damage model with strain softening is considered. In this context, and in order to avoid the Boundary Value Problem ill-posedness induced by the softening law, a regularization technique based on the Continuum Strong Discontinuity Approach (CSDA ) is adopted, which results equivalent to a damage model with embedded cohesive cracks providing anisotropic responses. (ii) A plastic model governs the material behavior when the mean stress is negative (confinement states). It is based on the classical plastic flow theory. In particular, a yield criterion similar to that of Willam and coauthors, which depends on the three stress invariants, is used. Additional features defining the plastic response are: an isotropic strain hardening law and a non-associative flow rule. The paper presents the numerical implementation of the model using an efficient integration algorithm, namely, the Impl-Ex scheme. Several widely known experimental tests (such as uniaxial, biaxial and triaxial tests) carried out on concrete specimens are used to calibrate and validate the performance of the proposed formulation. Finally, a classical 2D reinforced concrete beam example is analyzed in order to show the predictive capability of the model in structural analysis applications.
Description
This is the peer reviewed version of the following article: [Sánchez, P.J., Huespe, A.E., Oliver, J., Diaz, G. and Sonzogni, V.E. (2012), A macroscopic damage‐plastic constitutive law for modeling quasi‐brittle fracture and ductile behavior of concrete. Int. J. Numer. Anal. Meth. Geomech., 36: 546-573. doi:10.1002/nag.1013], which has been published in final form at https://onlinelibrary.wiley.com/doi/abs/10.1002/nag.1013. This article may be used for non-commercial purposes in accordance with Wiley Terms and Conditions for Self-Archiving.
CitationSánchez, P. [et al.]. A macroscopic damage-plastic constitutive law for modeling quasi-brittle fracture and ductile behavior of concrete. "International journal for numerical and analytical methods in geomechanics", Abril 2012, vol. 36, núm. 5, p. 546-573.
URIhttp://hdl.handle.net/2117/192412
DOI10.1002/nag.1013
ISSN0363-9061
Publisher versionhttps://onlinelibrary.wiley.com/doi/abs/10.1002/nag.1013
Collections
Share: