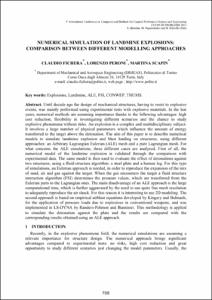 Show full item record
Fichera, Claudio
Peroni, Lorenzo
Scapin, Martina
Document typeConference report
PublisherCIMNE
Rights accessOpen Access
Abstract
Until decade ago the design of mechanical structures, having to resist to explosive events, was mainly performed using experimental tests with explosive materials. In the last years, numerical methods are assuming importance thanks to the following advantages: high cost reduction, flexibility in investigating different scenarios and the chance to study explosive phenomena without risks. An explosion is a complex and multidisciplinary subject. It involves a large number of physical parameters which influence the amount of energy transferred to the target above the detonation. The aim of this paper is to describe numerical models to simulate landmine explosion and blast loading on structures, using different approaches: an Arbitrary Lagrangian Eulerian (ALE) mesh and a pure Lagrangian mesh. For what concerns the ALE simulations, three different cases are analyzed. First of all, the numerical model of the landmine explosion is validated through the comparison with experimental data. The same model is then used to evaluate the effect of detonations against two structures, using a fluid-structure algorithm: a steel plate and a human leg. For this type of simulations, an Eulerian approach is needed, in order to reproduce the expansion of the mix of sand, air and gas against the target. When the gas encounters the target a fluid structure interaction algorithm (FSI) determines the pressure values, which are transferred from the Eulerian parts to the Lagrangian ones. The main disadvantage of an ALE approach is the large computational time, which is further aggravated by the need to use quite fine mesh resolution to adequately reproduce the air shock. For this reason it is interesting to use 2D modeling. The second approach is based on empirical airblast equations developed by Kingery and Bulmash, for the application of pressure loads due to explosives in conventional weapons, and was implemented in LS-DYNA by Randers-Pehrson and Bannister. This methodology is applied to simulate the detonation against the plate and the results are compared with the corresponding results obtained using an ALE approach.
URIhttp://hdl.handle.net/2117/192399
ISBN978-84-941407-6-1
Collections
Share: