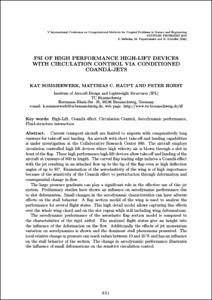 Show full item record
Sommerwerk, Kay
Haupt, Matthias C.
Horst, Peter
Document typeConference report
PublisherCIMNE
Rights accessOpen Access
Abstract
Current transport aircraft are limited to airports with comparatively long runways for take-off and landing. An aircraft with short take-off and landing capabilities is under investigation at the Collaborative Research Center 880. The aircraft employs circulation controlled high lift devices where high velocity air is blown through a slot in front of the flap. These high performance high-lift devices allow take-off and landing of the aircraft at runways of 800 m length. The curved flap leading edge induces a Coandˇa effect with the jet resulting in an attached flow up to the tip of the flap even at high deflection angles of up to 85 . Examination of the aeroelasticity of the wing is of high importance because of the sensitivity of the Coandˇa effect to perturbation through deformation and consequential change in flow. The large pressure gradients can play a significant role in the effective use of this jet system. Preliminary studies have shown an influence on aerodynamic performance due to slot deformation. Small changes in the aerodynamic characteristics can have adverse effects on the stall behavior. A flap section model of the wing is used to analyze the performance for several flight states. This high detail model allows capturing fine effects over the whole wing chord and on the slot region while still including wing deformations. The aerodynamic performance of the aeroelastic flap section model is compared to the characteristics of the rigid airfoil. The analyzed flight states give an insight into the influence of the deformation on the flow. Additionally the effects of jet momentum variation on aerodynamics is shown and the dominant stall phenomena presented. The local relative change in pressure can reach values between 10 and 20 % and has an influence on the stall behavior of the section. The change in aerodynamic performance illustrates the influence of small deformations on the sensitive circulation control.
URIhttp://hdl.handle.net/2117/192387
ISBN978-84-941407-6-1
Collections
Share: