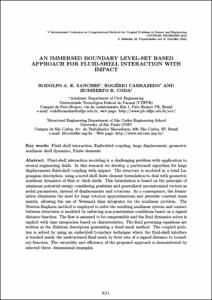 Show full item record
Sanches, Rodolfo A.K.
Carrazedo, Rogério
Coda, Humberto B.
Document typeConference report
PublisherCIMNE
Rights accessOpen Access
Abstract
Fluid-shell interaction modeling is a challenging problem with application to several engineering fields. In this research we develop a partitioned algorithm for large displacements fluid-shell coupling with impact. The structure is modeled in a total Lagrangian description, using a novel shell finite element formulation to deal with geometric nonlinear dynamics of thin or thick shells. This formulation is based on the principle of minimum potential energy considering positions and generalized unconstrained vectors as nodal parameters, instead of displacements and rotations. As a consequence, the formulation eliminates the need for large rotation approximations and presents constant mass matrix, allowing the use of Newmark time integrator for the nonlinear problem. The Newton-Raphson method is employed to solve the resulting nonlinear system and contact between structures is modeled by enforcing non-penetration conditions based on a signed distance function. The flow is assumed to be compressible and the fluid dynamics solver is explicit with time integration based on characteristics. The fluid governing equations are written in the Eulerian description generating a fixed mesh method. The coupled problem is solved by using an embedded boundary technique where the fluid-shell interface is tracked inside the unstructured fluid mesh by level sets of a signed distance to boundary function. The versatility and efficiency of the proposed approach is demonstrated by selected three- dimensional examples.
URIhttp://hdl.handle.net/2117/192378
ISBN978-84-941407-6-1
Collections
Share: