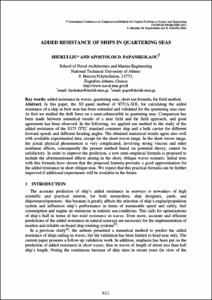 Show full item record
Liu, Shukui
Papanikolaou, Apostolos D.
Document typeConference report
PublisherCIMNE
Rights accessOpen Access
Abstract
In this paper, the 3D panel method of NTUA-SDL for calculating the added resistance of a ship in bow seas has been extended and validated for the quartering seas case. At first we studied the drift force on a semi-submersible in quartering seas. Comparison has been made between numerical results of a near field and far field approach, and good agreement has been observed. In the following, we applied our method to the study of the added resistance of the S175 ITTC standard container ship and a bulk carrier for different forward speeds and different heading angles. The obtained numerical results agree also well with available experimental data, except for the short waves range. In the short waves range, the actual physical phenomenon is very complicated, involving strong viscous and other nonlinear effects, consequently the present method based on potential theory, cannot be satisfactory. In order to improve the prediction, a new semi-empirical formula is proposed to include the aforementioned effects arising in the short, oblique waves scenario. Initial tests with this formula have shown that the proposed formula provides a good approximation for the added resistance in short oblique seas. We expect that this practical formula can be further improved if additional experiments will be available in the future.
URIhttp://hdl.handle.net/2117/192377
ISBN978-84-941407-6-1
Collections
Share: