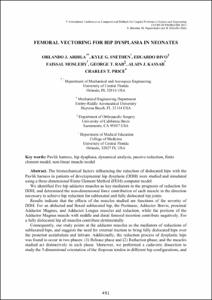 Show full item record
Ardila, Orlando J.
Snethen, Kyle G.
Divo, Eduardo
Moslehy, Faissal
Rab, George T.
Kassab, Alain J.
Price, Charles T.
Document typeConference report
PublisherCIMNE
Rights accessOpen Access
Abstract
The biomechanical factors influencing the reduction of dislocated hips with the Pavlik harness in patients of developmental hip dysplasia (DDH) were studied and simulated using a three-dimensional Finite Element Method (FEM) computer model. We identified five hip adductor muscles as key mediators in the prognosis of reduction for DDH, and determined the non-dimensional force contribution of each muscle in the direction necessary to achieve hip reduction for subluxated and fully dislocated hip joints. Results indicate that the effects of the muscles studied are functions of the severity of DDH. For an abducted and flexed subluxated hip, the Pectineus, Adductor Brevis, proximal Adductor Magnus, and Adductor Longus muscles aid reduction, while the portions of the Adductor Magnus muscle with middle and distal femoral insertion contribute negatively. For a fully dislocated hip all muscles contribute detrimentally. Consequently, our study points at the adductor muscles as the mediators of reductions of subluxated hips, and suggests the need for external traction to bring fully dislocated hips over the posterior acetabulum and labrum. Additionally, the reduction process of dysplastic hips was found to occur in two phases: (1) Release phase and (2) Reduction phase, and the muscles studied act distinctively in each phase. Moreover, we performed a cadaveric dissection to study the 3-dimensional orientation of the iliopsoas tendon in different hip configurations, and found that in hip abduction and flexion this tendon is likely not an obstruction to DDH reductions. We also report on the development of an improved three-dimensional anatomical computer model of the hip and femora of a 10-week old female infant for further study of hip dysplasia and other conditions of the hip using dynamic simulations and the Finite Element Method. This model was generated by combining CT-scans from four human subjects, as well as muscle positional data. It was segmented to encompass the distinct cartilaginous regions of infant anatomy, as well as the different regions of cortical and cancellous bone; these properties were retrieved from the literature. This engineering computer model of an infant anatomy is being employed f or ( 1) t he development of an anatomy-based finite element and dynamics computer model for simulations of hip dysplasia reductions using novel treatment approaches, (2) the determination of a path of least resistance in reductions of hip dysplasia based on a minimum potential energy approach, (3) the study of the mechanics of hyperflexion of the hip as alternative treatment for late-presenting cases of hip dysplasia, and (4) a comprehensive investigation of the effects of femoral anteversion angle (AV) variations in reductions of hip dysplasia. This study thus reports on an interdisciplinary effort between orthopedic surgeons and mechanical engineers to apply engineering fundamentals to solve medical problems. The results of this research are clinically relevant in pediatric orthopaedics.
URIhttp://hdl.handle.net/2117/192350
ISBN978-84-941407-6-1
Collections
Share: