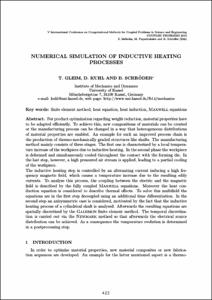 Show full item record
Gleim, T.
Kuhl, D.
Schröder, B.
Document typeConference report
PublisherCIMNE
Rights accessOpen Access
Abstract
For product optimization regarding weight reduction, material properties have to be adapted efficiently. To achieve this, new compositions of materials can be created or the manufacturing process can be changed in a way that heterogeneous distributions of material properties are enabled. An example for such an improved process chain is the production of thermo-mechanically graded structures like shafts. The manufacturing method mainly consists of three stages. The first one is characterized by a local temperature increase of the workpiece due to inductive heating. In the second phase the workpiece is deformed and simultaneously cooled throughout the contact with the forming die. In the last step, however, a high pressured air stream is applied, leading to a partial cooling of the workpiece. The inductive heating step is controlled by an alternating current inducing a high frequency magnetic field, which causes a temperature increase due to the resulting eddy currents. To analyse this process, the coupling between the electric and the magnetic field is described by the fully coupled Maxwell equations. Moreover the heat conduction equation is considered to describe thermal effects. To solve this multifield the equations are in the first step decoupled using an additional time differentiation. In the second step an axisymmetric case is considered, motivated by the fact that the inductive heating process of a cylindrical shaft is analysed. Afterwards the resulting equations are spatially discretized by the Galerkin finite element method. The temporal discretization is carried out via the Newmark method so that afterwards the electrical source distribution can be achieved. As a consequence the temperature evolution is determined in a postprocessing step.
URIhttp://hdl.handle.net/2117/192344
ISBN978-84-941407-6-1
Collections
Share: