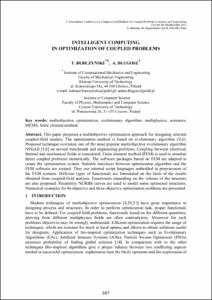 Show full item record
Burczynski, T.
Dlugosz, A.
Document typeConference report
PublisherCIMNE
Rights accessOpen Access
Abstract
This paper proposes a multiobjective optimization approach for designing selected coupled-field models. The optimization method is based on evolutionary algorithm (EA). Proposed technique overtakes one of the most popular multiobjective evolutionary algorithm NSGAII [5,6] on several benchmark and engineering problems. Coupling between electrical, thermal and mechanical fields is considered. Finite element method (FEM) is used to simulate direct coupled problems numerically. The software packages based on FEM are adapted to create the optimization system. Suitable interfaces between optimization algorithm and the FEM software are created. They use internal script languages embedded in preprocesors of the FEM systems. Different types of functionals are formulated on the basis of the results obtained from coupled-field analysis. Functionals depending on the volume of the structure are also proposed. Parametric NURBS curves are used to model some optimized structures. Numerical examples for bi-objective and three-objective optimization problems are presented.
URIhttp://hdl.handle.net/2117/192341
ISBN978-84-941407-6-1
Collections
Share: