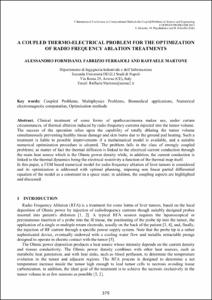 Show full item record
Formisano, Alessandro
Ferraioli, Fabrizio
Martone, Raffaele
Document typeConference report
PublisherCIMNE
Rights accessOpen Access
Abstract
Clinical treatment of some forms of epathocarcinoma makes use, under certain circumstances, of thermal ablation induced by radio frequency currents injected into the tumor volume. The success of the operation relies upon the capability of totally ablating the tumor volume simultaneously preventing healthy tissue damage and skin burns due to the ground pad heating. Such a treatment is liable to possible improvements if a mathematical model is available, and a suitable numerical optimization procedure is adopted. The problem falls in the class of strongly coupled problems; as matter of fact the thermal diffusion is linked to the electrical current conduction through the main heat source which is the Ohmic power density while, in addition, the current conduction is linked to the thermal dynamics being the electrical resistivity a function of the thermal map itself. In this paper, a FEM based numerical model for radio frequency ablation of liver tumors is considered and its optimization is addressed with optimal planning, imposing non linear partial differential equation of the model as a constraint in a space state; in addition, the coupling aspects are highlighted and discussed.
URIhttp://hdl.handle.net/2117/192340
ISBN978-84-941407-6-1
Collections
Share: