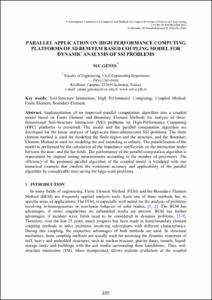 Show full item record
Genes, M.C.
Document typeConference report
PublisherCIMNE
Rights accessOpen Access
Abstract
Implementation of an improved parallel computation algorithm into a coupled model based on Finite Element and Boundary Element Methods for analysis of threedimensional Soil-Structure Interaction (SSI) problems on High-Performance Computing (HPC) platforms is presented. The model and the parallel computation algorithm are developed for the linear analysis of large-scale three-dimensional SSI problems. The finite element method is used for modeling the finite region and the structure, and the Boundary Element Method is used for modeling the soil extending to infinity. The parallelization of the model is performed by the calculation of the impedance coefficients on the interaction nodes between the near- and the far-fields. The performance of the parallel computation algorithm is represented by elapsed timing measurements according to the number of processors. The efficiency of the proposed parallel algorithm of the coupled model is validated with one numerical example that confirm the consistent accuracy and applicability of the parallel algorithm by considerable time saving for large-scale problems.
URIhttp://hdl.handle.net/2117/192258
ISBN978-84-941407-6-1
Collections
Share: