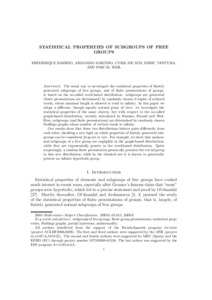 Weil, Pascal
Document typeArticle
Rights accessOpen Access
Abstract
The usual way to investigate the statistical properties of finitely generated subgroups of free groups, and of finite presentations of groups, is based on the so-called word-based distribution: subgroups are generated (finite presentations are determined) by randomly chosen k -tuples of reduced words, whose maximal length is allowed to tend to infinity. In this paper we adopt a different, though equally natural point of view: we investigate the statistical properties of the same objects, but with respect to the so-called graph-based distribution, recently introduced by Bassino, Nicaud and Weil. Here, subgroups (and finite presentations) are determined by randomly chosen Stallings graphs whose number of vertices tends to infinity. Our results show that these two distributions behave quite differently from each other, shedding a new light on which properties of finitely generated subgroups can be considered frequent or rare. For example, we show that malnormal subgroups of a free group are negligible in the graph-based distribution, while they are exponentially generic in the word-based distribution. Quite surprisingly, a random finite presentation generically presents the trivial group in this new distribution, while in the classical one it is known to generically present an infinite hyperbolic group.
CitationBassino, F. [et al.]. Statistical properties of subgroups of free groups. "Random structures and algorithms", 04 Febrer 2013, vol. 42, núm. 3, p. 349-373.
URIhttp://hdl.handle.net/2117/19212
DOI10.1002/rsa.20407
ISSN1042-9832
Publisher versionhttp://onlinelibrary.wiley.com/doi/10.1002/rsa.20407/abstract
Collections
Share: