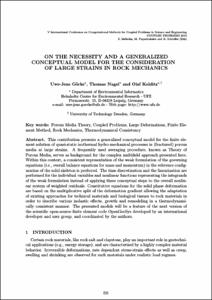 Show full item record
Görke, Uwe-Jens
Nagel, Thomas
Kolditz, Olaf
Document typeConference report
PublisherCIMNE
Rights accessOpen Access
Abstract
This contribution presents a generalized conceptual model for the finite element solution of quasi-static isothermal hydro-mechanical processes in (fractured) porous media at large strains. A frequently used averaging procedure, known as Theory of Porous Media, serves as background for the complex multifield approach presented here. Within this context, a consistent representation of the weak formulation of the governing equations (i.e., overall balance equations for mass and momentum) in the reference configuration of the solid skeleton is preferred. The time discretization and the linearization are performed for the individual variables and nonlinear functions representing the integrands of the weak formulation instead of applying these conceptual steps to the overall nonlinear system of weighted residuals. Constitutive equations for the solid phase deformation are based on the multiplicative split of the deformation gradient allowing the adaptation of existing approaches for technical materials and biological tissues to rock materials in order to describe various inelastic effects, growth and remodeling in a thermodynamically consistent manner. The presented models will be a feature of the next version of the scientific open-source finite element code OpenGeoSys developed by an international developer and user group, and coordinated by the authors.
URIhttp://hdl.handle.net/2117/192108
ISBN978-84-941407-6-1
Collections
Share: