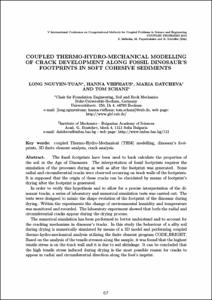 Show full item record
Ngutyen-Tuan, Long
Viefhaus, Hanna
Datcheva, Maria
Schanz, Tom
Document typeConference report
PublisherCIMNE
Rights accessOpen Access
All rights reserved. This work is protected by the corresponding intellectual and industrial property rights. Without prejudice to any existing legal exemptions, reproduction, distribution, public communication or transformation of this work are prohibited without permission of the copyright holder
Abstract
The fossil footprints have been used to back calculate the properties of the soil in the Age of Dinosaurs. The interpretation of fossil footprints requires the simulation of the processes during as well as after the footprint was generated. Some radial and circumferential cracks were observed occurring on track walls of the footprints. It is supposed that the origin of these cracks can be elucidated by means of footprint’s drying after the footprint is generated. In order to verify this hypothesis and to allow for a precise interpretation of the dinosaur tracks, a series of laboratory and numerical simulation tests was carried out. The tests were designed to mimic the shape evolution of the footprint of the dinosaur during drying. Within the experiments the change of environmental humidity and temperature was monitored and recorded. The laboratory experiment showed that both the radial and circumferential cracks appear during the drying process. The numerical simulation has been performed to better understand and to account for the cracking mechanism in dinosaur’s tracks. In this study the behaviour of a silty soil during drying is numerically simulated by means of a 3D model and performing coupled thermo-hydro-mechanical analysis utilizing the finite element program CODE BRIGHT. Based on the analysis of the tensile stresses along the sample, it was found that the highest tensile stress is on the track wall and it is due to soil shrinkage. It can be concluded that the high tensile stress induced during drying is the most possible reason for cracks to appear in radial and circumferential direction along the foot’s imprint.
URIhttp://hdl.handle.net/2117/192107
ISBN978-84-941407-6-1
Collections
Share: