Anisotropic diffusion and propagation of sound waves in poroelastic media 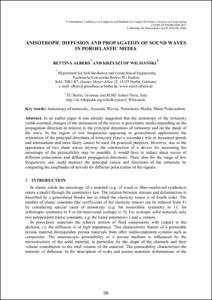 Show full item record
Albers, Bettina
Wilmanski, Krzysztof
Document typeConference report
PublisherCIMNE
Rights accessOpen Access
Abstract
In an earlier paper it was already suggested that the anisotropy of the tortuosity yields essential changes of the attenuation of the waves in poroelastic media depending on the propagation direction in relation to the principal directions of tortuosity and on the mode of the wave. In the region of low frequencies appearing in geotechnical applications the orientation of the principal directions of tortuosity plays a secondary role in measured speeds and attenuations and most likely cannot be used for practical purposes. However, due to the appearance of two shear waves anyway the construction of a device for measuring the anisotropy of the permeability may be possible. It would have to induce shear waves of different polarization and different propagation directions. Then, also for the range of low frequencies, one could measure the principal values and directions of the tortuosity by comparing the amplitudes of arrivals for different polarization of the signals.
URIhttp://hdl.handle.net/2117/192102
ISBN978-84-941407-6-1
Collections
Share: