Implementation and evaluation of semantic clustering techniques for Fog nodes 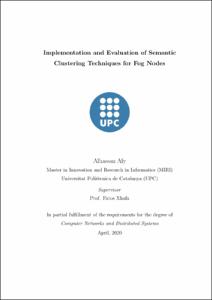 Document typeMaster thesis
Rights accessOpen Access
Abstract
Growing at an extremely rapid rate, the Internet of Things (IoT) devices are becoming a crucial part of our everyday lives. They are embedded in almost everything we do on a daily basis. From simple sensors, cell phones, wearable devices to smart city technologies, we are becoming heavily dependent on such devices. At this current state, the Cloud paradigm is being ooded by massive amounts of data continuously. The current amounts of data is minimal compared to the amounts that we are about to witness in the near future, mainly because of the 5G deployment expediting and the increase in network intelligence. This increased data could lead to more network congestion and higher latency, due to the physical distance between the devices and the Cloud data centers. Therefore, a need for a new model is paramount, and will be essential in realizing the Internet of Everything (IoE) and the next stage in the digital evolution. Fog computing is one of the promising paradigms, since it extends the Cloud with intelligent computing units, placed closer to where the data is being generated to o oad the Cloud. This tackles the issues of latency, mobility and network congestion. In this work we present a conceptual Fog computing ecosystem, where we model the Cloud to Fog (C2F) environment. Then we implement two dynamic clustering techniques of Fog nodes to utilize combined resources, using a semantic description of the Fog nodes' resources and properties of the edge devices. Finally, we optimize the assignment of applications over Fog cluster resources, using Linear programming and a First Fit Heuristic Algorithm. We evaluate our implementation by analyzing the di erences between the two clustering techniques. We perform several experiments to evaluate our implementation, and the results prove that the heuristic optimization of task allocation is much faster and more consistent than the Linear programming solver, as expected. Moreover, the results show that clustering Fog nodes is bene cial in o oading the Cloud and reducing response times.
SubjectsCloud computing, Semantics, Computació en núvol, Semàntica
URIhttp://hdl.handle.net/2117/192091
Collections
Share: