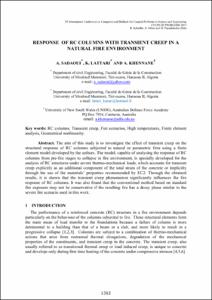 Show full item record
Sadaoui, A.
Lattari, K.
Khennane, A.
Document typeConference report
PublisherCIMNE
Rights accessOpen Access
All rights reserved. This work is protected by the corresponding intellectual and industrial property rights. Without prejudice to any existing legal exemptions, reproduction, distribution, public communication or transformation of this work are prohibited without permission of the copyright holder
Abstract
The aim of this study is to investigate the effect of transient creep on the structural response of RC columns subjected to natural or parametric fires using a finite element model developed by the authors. The model, capable of analysing the response of RC columns from pre-fire stages to collapse in fire environment, is specially developed for the analysis of RC structures under severe thermo-mechanical loads, which accounts for transient creep explicitly as an additional component of the total strain of the concrete or implicitly through the use of the materials’ properties recommended by EC2. Through the obtained results, it is shown that the transient creep phenomenon significantly influences the fire response of RC columns. It was also found that the conventional method based on standard fire exposure may not be conservative if the resulting fire has a decay phase similar to the severe fire scenario used in this work.
URIhttp://hdl.handle.net/2117/192077
ISBN978-84-943928-3-2
Collections
Share: