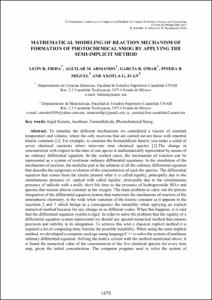 Show full item record
León R., Frida
Aguilar M., Armando
García R., Omar
Pineda B., Miguel
Axotla G., Juan
Document typeConference report
PublisherCIMNE
Rights accessOpen Access
Abstract
To simulate the different mechanisms we considered a reactor of constant temperature and volume, where the only reactions that are carried out are those with reported kinetic constants [1]. For example, to simulate the formaldehyde kinetic you make a serial of seven chemical reactions where intervene nine chemical species [2].The change in concentration with respect to the time of one specie is mathematically represented by means of an ordinary differential equation. In the studied cases, the mechanism of reaction can be represented as a system of nonlinear ordinary differential equations. In the simulation of the mechanism of reaction, the medullar part is the solution of all the ordinary differential equation that describe the temporary evolution of the concentration of each the species. The differential equation that comes from the kinetic present what it is called rigidity, principally due to the simultaneous presence of radical with called rigidity, principally due to the simultaneous presence of radicals with a really short life time as the presence of hydroperoxide HO2• and species that remain almost constant as the oxygen. The main problem to carry out the precise integration of the differential equation system that represents the mechanism of reaction of the atmospheric chemistry, is the wide when variation of the kinetic constant as it appears in the reactions 2 and 7 which brings as a consequence the instability when applying an explicit numerical method because for any change in so different scales. When this happens, it is said that the differential equation system is rigid. In order to solve the problem that the rigidity of a differential equation system represented we should use special numerical method that ensures precision and stability in its integration. To achieve this whit a classical explicit method it is required a lot of computing time, besides the possible instability. When using the semi implicit method, we developed a computer package using language C++ to solve the system of nonlinear ordinary differential equation. Solving the matrix system with the method mentioned above, it is found the numerical value of the concentration of the five chemical species for every time step, given the initial concentration. The computer program used to solve the system of differential equation was developed in UNAM.
URIhttp://hdl.handle.net/2117/192070
ISBN978-84-943928-3-2
Collections
Share: