Climate drivers of the 2017 devastating fires in Portugal 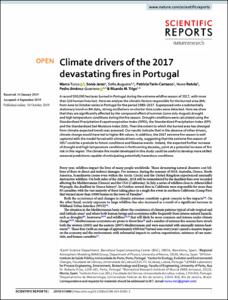 A record 500,000 hectares burned in Portugal during the extreme wildfire season of 2017, with more than 120 human lives lost. Here we analyse the climatic factors responsible for the burned area (BA) from June to October series in Portugal for the period 1980–2017. Superposed onto a substantially stationary trend on BA data, strong oscillations on shorter time scales were detected. Here we show that they are significantly affected by the compound effect of summer (June-July-August) drought and high temperature conditions during the fire season. Drought conditions were calculated using the Standardized Precipitation Evapotranspiration Index (SPEI), the Standardized Precipitation Index (SPI) and the Standardized Soil Moisture Index (SSI). Then the extent to which the burned area has diverged from climate-expected trends was assessed. Our results indicate that in the absence of other drivers, climate change would have led to higher BA values. In addition, the 2017 extreme fire season is well captured with the model forced with climate drivers only, suggesting that the extreme fire season of 2017 could be a prelude to future conditions and likewise events. Indeed, the expected further increase of drought and high temperature conditions in forthcoming decades, point at a potential increase of fire risk in this region. The climate-fire model developed in this study could be useful to develop more skilled seasonal predictions capable of anticipating potentially hazardous conditions.
CitationTurco, M. [et al.]. Climate drivers of the 2017 devastating fires in Portugal. "Scientific Reports", 2019, vol. 9, 13886.
URIhttp://hdl.handle.net/2117/191926
DOI10.1038/s41598-019-50281-2
ISSN2045-2322
Publisher versionhttps://www.nature.com/articles/s41598-019-50281-2