Parallel complexity in the design and analysis of concurrent systems 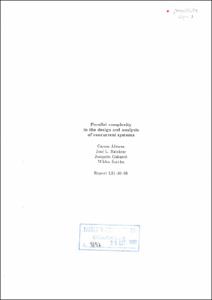 Document typeExternal research report
Rights accessOpen Access
Abstract
We study the parallel complexity of three problems on concurrency: decision of firing sequences for Petri nets, trace equivalence for partially commutative monoids, and strong bisimilarity in finite transition systems. We show that the first two problems can be efficiently parallelized, allowing logarithmic time Parallel RAM algorithms and even constant time unbounded fan-in circuits with threshold gates. However, lower bounds imply that they cannot be solved in constant time by a PRAM algorithm. On the other hand, strong bisimilarity in finite labelled transition systems can be classified as P-complete; as a consequence, algorithms for automated analysis of finite state systems based on bisimulation seem to be inherently sequential in the following sense: the design of an efficient parallel algorithm to solve any of these problems will require an exceedingly hard algorithmic breakthrough.
CitationAlvarez, C.; Balcazar, J. L.; Gabarro, J. "Parallel complexity in the design and analysis of concurrent systems". 1990.
Is part ofLSI-90-38
URIhttp://hdl.handle.net/2117/191920
Collections
Share: