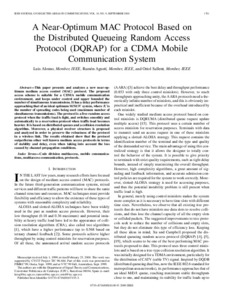 Document typeArticle
PublisherIEEE-INST ELECTRICAL ELECTRONICS ENGINEERS INC
Rights accessOpen Access
All rights reserved. This work is protected by the corresponding intellectual and industrial property rights. Without prejudice to any existing legal exemptions, reproduction, distribution, public communication or transformation of this work are prohibited without permission of the copyright holder
Abstract
This paper presents and analyzes a new near-optimum medium access control (MAC) protocol. The proposed access scheme is suitable for a CDMA mobile communication environment, and keeps under control and upper bounded the number of simultaneous transmissions. It has a delay performance approaching that of an ideal optimum M/M/K system, where K is the number of spreading codes being used (maximum number of simultaneous transmissions). The protocol is a free random access protocol when the traffic load is light, and switches smoothly and automatically to a reservation protocol when traffic load becomes heavier. It is based on distributed queues and a collision resolution algorithm. Moreover, a physical receiver structure is proposed and analyzed in order to preserve the robustness of the protocol in a wireless link. The results obtained show that the protocol outperforms other well known medium access protocols in terms of stability and delay, even when taking into account the loss caused by channel propagation conditions.
CitationAlonso Zárate, L.G; Agustí Comes, R; Sallent Roig, J.O. A near-optimum MAC protocol based on the distributed queueing random access protocol (DQRAP) for a CDMA mobile communication system. IEEE Journal on Selected Areas in Communications, 2000, vol. 18, núm. 9, pàg. 1701-1718
URIhttp://hdl.handle.net/2117/1919
ISSN0733-8716
Collections
Share: