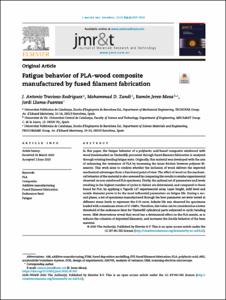 Document typeArticle
PublisherElsevier
Rights accessOpen Access
Abstract
In this paper, the fatigue behavior of a polylactic acid-based composite reinforced with wood (trademarked as Timberfill) processed through fused filament fabrication is analyzed through rotating bending fatigue tests. Originally, this material was developed with the aim of enhancing the resistance of PLA by increasing the inner friction between polymer filaments. This work aims to confirm whether the inclusion of wood delivers the expected mechanical advantages from a functional point of view. The effect of wood on the mechanical behavior of the material is also assessed by comparing the results to similar experimental observed on non-reinforced PLA specimens. Firstly, the optimal set of parameters and levels resulting in the highest number of cycles to failure are determined, and compared to those found for PLA, by applying a Taguchi L27 experimental array. Layer height, infill level and nozzle diameter prove to be the most influential parameters on fatigue life. During a second phase, a set of specimens manufactured through the best parameter set were tested at different stress levels to represent the S-N curve. Infinite life was observed for specimens loaded with a maximum stress of 17.9¿MPa. Therefore, this value can be considered as a lower threshold of the endurance limit for Timberfill cylindrical parts subjected to cyclic bending stress. SEM observations reveal that wood has a detrimental effect on the PLA matrix, as is reduces the cohesion of deposited filaments, and increases the ductile behavior of the base material.
CitationTravieso-Rodríguez, J.A. [et al.]. Fatigue behavior of PLA-wood composite manufactured by fused filament fabrication. "Journal of materials research and technology", 8 Juliol 2020, vol. 9, núm. 4, p. 8507-8516.
URIhttp://hdl.handle.net/2117/191715
DOI10.1016/j.jmrt.2020.06.003
ISSN2238-7854
Publisher versionhttps://www.sciencedirect.com/science/article/pii/S2238785420314046
Collections
Share: