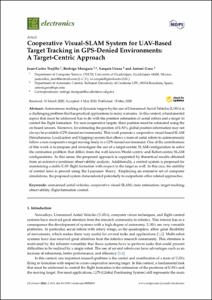 Document typeArticle
Rights accessOpen Access
Abstract
Autonomous tracking of dynamic targets by the use of Unmanned Aerial Vehicles (UAVs) is a challenging problem that has practical applications in many scenarios. In this context, a fundamental aspect that must be addressed has to do with the position estimation of aerial robots and a target to control the flight formation. For non-cooperative targets, their position must be estimated using the on-board sensors. Moreover, for estimating the position of UAVs, global position information may not always be available (GPS-denied environments). This work presents a cooperative visual-based SLAM (Simultaneous Localization and Mapping) system that allows a team of aerial robots to autonomously follow a non-cooperative target moving freely in a GPS-denied environment. One of the contributions of this work is to propose and investigate the use of a target-centric SLAM configuration to solve the estimation problem that differs from the well-known World-centric and Robot-centric SLAM configurations. In this sense, the proposed approach is supported by theoretical results obtained from an extensive nonlinear observability analysis. Additionally, a control system is proposed for maintaining a stable UAV flight formation with respect to the target as well. In this case, the stability of control laws is proved using the Lyapunov theory. Employing an extensive set of computer simulations, the proposed system demonstrated potentially to outperform other related approaches
CitationTrujillo, J.-C. [et al.]. Cooperative visual-SLAM system for UAV-based target tracking in GPS-denied environments: a target-centric approach. "Electronics", 15 Maig 2020, vol. 9, núm. 5, p. 813:1-813:33.
URIhttp://hdl.handle.net/2117/191709
DOI10.3390/electronics9050813
ISSN2079-9292
Publisher versionhttps://www.mdpi.com/2079-9292/9/5/813
Collections
Share: