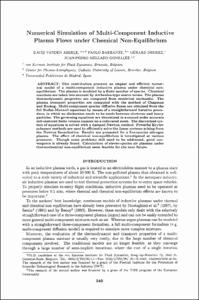 Document typeArticle
Rights accessOpen Access
Abstract
This contribution presents an elegant and efficient numer­ical model of a multi-component inductive plasma under chemical non­equilibrium, The plasma is modeled by a finite number of species. Chemical reactions are taken into account by Arrhenius-type source terms. The plasma thermodynamic properties are computed from statist.ical mechanics, The plasma transport properties are computed with the method of Chapman and Enskog, Multi-component species diffusive fluxes are obtained from the full Stefan-Maxwell equations by means of a straightforward iterative proce­dure, in which no distinction needs to be made between electrons and heavy particles, The governing equations are discretized in a second order accurate cell-centered finite volume manner on a collocated mesh. The discretized sys­tem of equations is solved with a damped Newton method. Powerful Krylov subspace methods are used to efficiently solve the linear systems arising from the Newton linearization, Results are presented for a five-species nitrogen plasma, The effect of chemical non-equilibrium is investigated at various pressures. Though some problems still need to be addressed, good con­vergence is already found, Calculations of eleven-species air plasmas under thermochemical non-equilibrium seem feasible for the near future.
Citationvanden Abeele, D. [et al.]. Numerical simulation of multicomponent inductive plasma flows under chemical non-equilibrium. "Annals of the New York Academy of Sciences", 6 Febrer 1999, vol. 891, p. 340-347.
URIhttp://hdl.handle.net/2117/191301
DOI10.1111/j.1749-6632.1999.tb08782.x
ISSN0077-8923
Collections
Share: