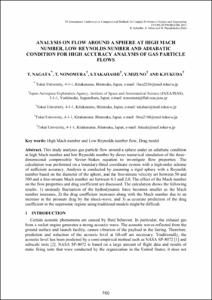 Show full item record
Nagata, T.
Nonomura, T.
Takahashi, S.
Mizuno, Y.
Fukuda, K.
Document typeConference report
PublisherCIMNE
Rights accessOpen Access
Abstract
This study analyses gas particle flow around a sphere under an adiabatic condition at high Mach number and low Reynolds number by direct numerical simulation of the three– dimensional compressible Navier–Stokes equation to investigate flow properties. The calculation was performed on a boundary-fitted coordinate system with a high-order scheme of sufficient accuracy. Analysis is conducted by assuming a rigid sphere with a Reynolds number based on the diameter of the sphere, and the free-stream velocity set between 50 and 300 and a free-stream Mach number set between 0.3 and 2.0. The effect of the Mach number on the flow properties and drag coefficient are discussed. The calculation shows the following results: 1) unsteady fluctuation of the hydrodynamic force becomes smaller as the Mach number increases, 2) the drag coefficient increases along with the Mach number due to an increase in the pressure drag by the shock-wave, and 3) an accurate prediction of the drag coefficient in the supersonic regime using traditional models might be difficult.
URIhttp://hdl.handle.net/2117/191296
ISBN978-84-943928-3-2
Collections
Share: