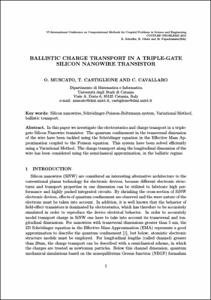 Show full item record
Muscato, O.
Castiglione, T.
Cavallaro, C.
Document typeConference report
PublisherCIMNE
Rights accessOpen Access
All rights reserved. This work is protected by the corresponding intellectual and industrial property rights. Without prejudice to any existing legal exemptions, reproduction, distribution, public communication or transformation of this work are prohibited without permission of the copyright holder
Abstract
In this paper we investigate the electrostatics and charge transport in a triplegate Silicon Nanowire transistor. The quantum confinement in the transversal dimension of the wire have been tackled using the Schr¨odinger equation in the Effective Mass Approximation coupled to the Poisson equation. This system have been solved efficiently using a Variational Method. The charge transport along the longitudinal dimension of the wire has been considered using the semiclassical approximation, in the ballistic regime.
URIhttp://hdl.handle.net/2117/191279
ISBN978-84-943928-3-2
Collections
Share: