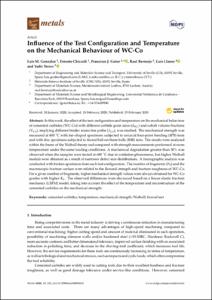 Torres, Yadir
Document typeArticle
PublisherMultidisciplinary Digital Publishing Institute (MDPI)
Rights accessOpen Access
Abstract
In this work, the effect of the test configuration and temperature on the mechanical behaviour of cemented carbides (WC-Co) with different carbide grain sizes (dWC) and cobalt volume fractions (VCo), implying different binder mean free paths (¿Co), was studied. The mechanical strength was measured at 600 °C with bar-shaped specimens subjected to uniaxial four-point bending (4PB) tests and with disc specimens subjected to biaxial ball-on-three-balls (B3B) tests. The results were analysed within the frame of the Weibull theory and compared with strength measurements performed at room temperature under the same loading conditions. A mechanical degradation greater than 30% was observed when the samples were tested at 600 °C due to oxidation phenomena, but higher Weibull moduli were obtained as a result of narrower defect size distributions. A fractographic analysis was conducted with broken specimens from each test configuration. The number of fragments (Nf) and the macroscopic fracture surface were related to the flexural strength and fracture toughness of WC-Co. For a given number of fragments, higher mechanical strength values were always obtained for WC-Co grades with higher KIc. The observed differences were discussed based on a linear elastic fracture mechanics (LEFM) model, taking into account the effect of the temperature and microstructure of the cemented carbides on the mechanical strength.
CitationGonzález, L. [et al.]. Influence of the test configuration and temperature on the mechanical behaviour of WC-Co. "Metals", 1 Març 2020, vol. 10, núm. 3, p. 322:1-322:12.
URIhttp://hdl.handle.net/2117/191207
DOI10.3390/met10030322
ISSN2075-4701
Publisher versionhttps://www.mdpi.com/2075-4701/10/3/322
Collections
Share: