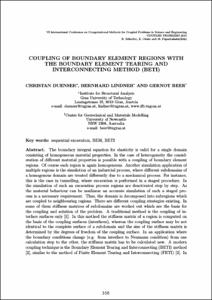 Show full item record
Duenser, Christian
Lindner, Bernhard
Beer, Gernot
Document typeConference report
PublisherCIMNE
Rights accessOpen Access
Abstract
The boundary integral equation for elasticity is valid for a single domain consisting of homogeneous material properties. In the case of heterogeneity the consideration of diﬀerent material properties is possible with a coupling of boundary element regions. Of course each region is again homogeneous. Another simulation application of multiple regions is the simulation of an industrial process, where diﬀerent subdomains of a homogenous domain are treated diﬀerently due to a mechanical process. For instance, this is the case in tunnelling, where excavation is performed in a staged procedure. In the simulation of such an excavation process regions are deactivated step by step. As the material behaviour can be nonlinear an accurate simulation of such a staged process is a necessary requirement. Thus, the domain is decomposed into subregions which are coupled to neighbouring regions. There are diﬀerent coupling strategies existing. In some of them stiﬀness matrices of subdomains are worked out which are the basis for the coupling and solution of the problem. A traditional method is the coupling of interface surfaces only [1]. In this method the stiﬀness matrix of a region is computed on the basis of the coupling surfaces (interfaces), whereas the coupling surface may be not identical to the complete surface of a subdomain and the size of the stiﬀness matrix is determined by the degrees of freedom of the coupling surface. In an application where the boundary conditions change (e.g. from interface to Neumann condition) from one calculation step to the other, the stiﬀness matrix has to be calculated new. A modern coupling technique is the Boundary Element Tearing and Interconnecting (BETI) method [2], similar to the method of Finite Element Tearing and Interconnecting (FETI) [3]. In this method the region stiﬀness matrix is worked out for the entire boundary of the region. The stiﬀness matrices of all regions remain the same during the whole analysis, even if the boundary conditions change during the simulation process. In setting up the equation system each subdomain is treated completely separated and independent from the others. Thus, a parallelisation of the computational work is ideally suited and implemented in the present computer code. In this work the theory of both mentioned coupling techniques are introduced brieﬂy. The diﬀerences of both methods are worked out and advantages/disadvantages are shown and will be demonstrated. The accuracy of the results as well as the computational performance will be shown and compared based on a realistic simulation example.
URIhttp://hdl.handle.net/2117/191156
ISBN978-84-943928-3-2
Collections
Share: