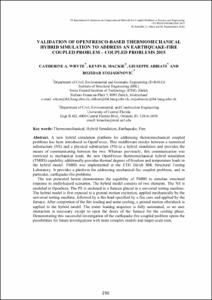 Show full item record
Whyte, Catherine A.
Mackie, Kevin R.
Abbiati, Giuseppe
Stojadinovic, Bozidar
Document typeConference report
PublisherCIMNE
Rights accessOpen Access
Abstract
A new hybrid simulation platform for addressing thermomechanical coupled problems has been introduced in OpenFresco. This middleware resides between a numerical substructure (NS) and a physical substructure (PS) in a hybrid simulation and provides the means of communicating between the two. Whereas previously, this communication was restricted to mechanical loads, the new OpenFresco thermomechanical hybrid simulation (TMHS) capability additionally provides thermal degrees of freedom and temperature loads in the hybrid model. TMHS was implemented at the ETH Zürich IBK Structural Testing Laboratory. It provides a platform for addressing mechanical-fire coupled problems, and in particular, earthquake-fire problems. The test presented herein demonstrates the capability of TMHS to simulate structural response to multi-hazard scenarios. The hybrid model consists of two elements. The NS is modeled in OpenSees. The PS is enclosed in a furnace placed in a universal testing machine. The hybrid model is first exposed to a ground motion excitation, applied mechanically by the universal testing machine, followed by a fire load specified by a fire cure and applied by the furnace. After completion of the fire loading and some cooling, a ground motion aftershock is applied to the hybrid model. The entire loading sequence is fully automated, so no user interaction is necessary except to open the doors of the furnace for the cooling phase. Demonstrating this successful investigation of the earthquake-fire coupled problem opens the possibilities for future investigations with more complex models and larger-scale tests.
URIhttp://hdl.handle.net/2117/191137
ISBN978-84-943928-3-2
Collections
Share: