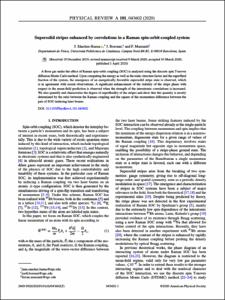 Document typeArticle
PublisherAmerican Physical Society (APS)
Rights accessOpen Access
Abstract
A Bose gas under the effect of Raman spin-orbit coupling (SOC) is analyzed using the discrete spin T-moves diffusion Monte Carlo method. Upon computing the energy as well as the static structure factor and the superfluid fraction of the system, the emergence of an energetically favorable supersolid stripe state is observed, which is in agreement with recent observations. A significant enhancement of the stability of the stripe phase with respect to the mean-field prediction is observed when the strength of the interatomic correlations is increased. We also quantify and characterize the degree of superfluidity of the stripes and show that this quantity is mostly determined by the ratio between the Raman coupling and the square of the momentum difference between the pair of SOC-inducing laser beams.
CitationSánchez, J.; Boronat, J.; Mazzanti, F. Supersolid stripes enhanced by correlations in a Raman spin-orbit-coupled system. "Physical review A", 1 Abril 2020, vol. 101, núm. 4, p. 043602:1-043602:5.
URIhttp://hdl.handle.net/2117/191090
DOIhttps://doi.org/10.1103/PhysRevA.101.043602
ISSN2469-9926
Publisher versionhttps://journals.aps.org/pra/abstract/10.1103/PhysRevA.101.043602
Collections
Share: