Simulation of consolidation in large strains: a comparison between finite element method and material point method 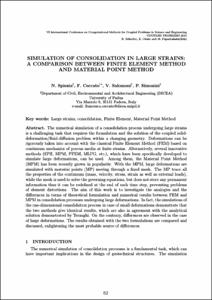 Show full item record
Spiezia, N.
Ceccato, F.
Salomoni, V.
Simonini, P.
Document typeConference report
PublisherCIMNE
Rights accessOpen Access
Abstract
The numerical simulation of a consolidation process undergoing large strains is a challenging task that requires the formulation and the solution of the coupled soliddeformation/ﬂuid-diﬀusion problem within a changing geometry. Deformations can be rigorously taken into account with the classical Finite Element Method (FEM) based on continuum mechanics of porous media at ﬁnite strains. Alternatively, several innovative methods (SPH, MPM, PFEM, MLPG, etc.), which have been speciﬁcally developed to simulate large deformations, can be used. Among them, the Material Point Method (MPM) has been recently grown in popularity. With the MPM, large deformations are simulated with material points (MP) moving through a ﬁxed mesh. The MP trace all the properties of the continuum (mass, velocity, stress, strain as well as external loads), while the mesh is used to solve the governing equations, but does not store any permanent information thus it can be redeﬁned at the end of each time step, preventing problems of element distortions. The aim of this work is to investigate the analogies and the diﬀerences in terms of theoretical formulation and numerical results between FEM and MPM in consolidation processes undergoing large deformations. In fact, the simulations of the one-dimensional consolidation process in case of small deformations demonstrate that the two methods give identical results, which are also in agreement with the analytical solution demonstrated by Terzaghi. On the contrary, diﬀerences are observed in the case of large deformations. The results obtained with the two formulations are compared and discussed, enlightening the most probable source of diﬀerences.
URIhttp://hdl.handle.net/2117/191007
ISBN978-84-943928-3-2
Collections
Share: