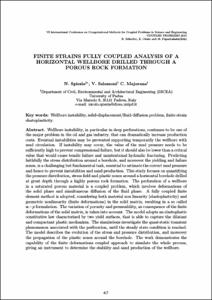 Show full item record
Spiezia, N.
Salomoni, V.
Majorana, C.
Document typeConference report
PublisherCIMNE
Rights accessOpen Access
Abstract
Wellbore instability, in particular in deep perforations, continues to be one of the major problem in the oil and gas industry, that can dramatically increase production costs. Eventual instabilities may be prevented supporting temporarily the wellbore with mud circulation. If instability may occur, the value of the mud pressure needs to be suﬃciently high to prevent compressional failure, but it should also be lower than a critical value that would cause tensile failure and unintentional hydraulic fracturing. Predicting faithfully the stress distribution around a borehole, and moreover the yielding and failure zones, is a challenging but fundamental task, essential to estimate the correct mud pressure and hence to prevent instabilities and sand production. This study focuses on quantifying the pressure distribution, stress ﬁeld and plastic zones around a horizontal borehole drilled at great depth through a highly porous rock formation. The perforation of a wellbore in a saturated porous material is a coupled problem, which involves deformations of the solid phase and simultaneous diﬀusion of the ﬂuid phase. A fully coupled ﬁnite element method is adopted, considering both material non linearity (elastoplasticity) and geometric nonlinearity (ﬁnite deformations) in the solid matrix, resulting in a so called u−p formulation. The variation of porosity and permeability, as consequence of the ﬁnite deformations of the solid matrix, is taken into account. The model adopts an elastoplastic constitutive law characterized by two yield surfaces, that is able to capture the dilatant and compactant plastic mechanism. The simulations investigate the quasi-static transient phenomenon associated with the perforation, until the steady state condition is reached. The model describes the evolution of the stress and pressure distribution, and moreover the propagation of the plastic zones around the borehole. The work demonstrates the capability of the ﬁnite deformations coupled approach to simulate the whole process, giving an instrument to determine the stability and sand production of the wellbore.
URIhttp://hdl.handle.net/2117/191003
ISBN978-84-943928-3-2
Collections
Share: