Effect of Filler on the Aging Potential of Asphalt Mixtures 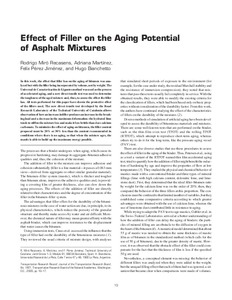 Effect of filler on the aging potential of asphalt mixtures.pdf (653,6Kb)
Share:

Bianchetto, Hugo Daniel
Document typeArticle
PublisherTransportation Research Board of the National Academies
Rights accessOpen Access
Abstract
In this work, the effect that filler has on the aging of bitumen was analyzed but with the filler being incorporated by volume, not by weight. The Universal de Caracterización de Ligantes method was used as the process of accelerated aging, and a new direct tensile test was used to determine the toughness of the aged mixture and, thus, to assess the effect the filler has. All tests performed for this paper have shown the protective effect of the fillers used. The new direct tensile test developed by the Road Research Laboratory of the Technical University of Catalonia allows observation of how an increase in filler produces an increase in the breaking load and a decrease in the maximum deformation: the hydrated lime tends to stiffen the mixture less and make it less brittle than does calcium carbonate. To minimize the effect of aging on bitumen, the filler content proposed must be 20% or 30% less than the content recommended in conditions where there is no aging, so that when the mixture ages, the mastic is able to build up the maximum energy possible.
CitationMiró Recasens, José Rodrigo [et al.]. Effect of Filler on the Aging Potential of Asphalt Mixtures. Transportation Research Record, 2005, n. 1901, p. 10-17.
URIhttp://hdl.handle.net/2117/1910
Collections
Share: