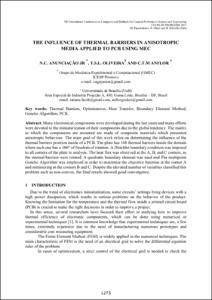 Show full item record
Anunciaçao Jr., N.C.
Oliveira, T.S.L.
Anflor, C.T.M.
Document typeConference report
PublisherCIMNE
Rights accessOpen Access
All rights reserved. This work is protected by the corresponding intellectual and industrial property rights. Without prejudice to any existing legal exemptions, reproduction, distribution, public communication or transformation of this work are prohibited without permission of the copyright holder
Abstract
Many electronical components were developed during the last years and many efforts were devoted to the miniaturization of their components due to the global tendency. The matrix in which the components are mounted are made of composite materials which presented anisotropic behaviour. The main goal of this work relies on determining the influence of the thermal barriers position inside of a PCB. The plate has 168 thermal barriers inside the domain where each one has a 360° of freedom of rotation. A Dirichlet boundary condition was imposed to all corners of the plate to analysis. The heat flux was observed at the A, B, and C corners, as the internal barriers were rotated. A quadratic boundary element was used and The multipoint Genetic Algorithm was employed in order to maximize the objective function at the corner A and minimizing at the corners B and C. Despite the elevated number of variables classified this problem such as non-convex, the final results showed good convergence.
URIhttp://hdl.handle.net/2117/190974
ISBN978-84-946909-2-1
Collections
Share: