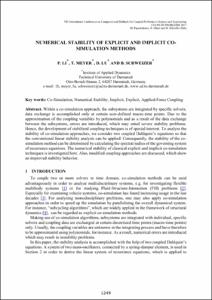 Show full item record
Li, P.
Meyer, T.
Lu, D.
Schweizer, B.
Document typeConference report
PublisherCIMNE
Rights accessOpen Access
Abstract
Within a co-simulation approach, the subsystems are integrated by specific solvers; data exchange is accomplished only at certain user-defined macro-time points. Due to the approximation of the coupling variables by polynomials and as a result of the data exchange between the subsystems, errors are introduced, which may entail severe stability problems. Hence, the development of stabilized coupling techniques is of special interest. To analyze the stability of co-simulation approaches, we consider two coupled Dahlquist’s equations so that the conventional linear stability analysis can be applied. Consequently, the stability of the cosimulation method can be determined by calculating the spectral radius of the governing system of recurrence equations. The numerical stability of classical explicit and implicit co-simulation techniques is investigated here. Also, modified coupling approaches are discussed, which show an improved stability behavior.
URIhttp://hdl.handle.net/2117/190971
ISBN978-84-946909-2-1
Collections
Share: