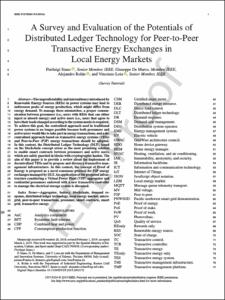 Except where otherwise noted, content on this work is licensed under a Creative Commons license : Attribution-NonCommercial-NoDerivs 3.0 Spain
Abstract
Theunpredictability and intermittency introduced by Renewable Energy Sources (RESs) in power systems may lead to unforeseen peaks of energy production, which might differ from energy demand. To manage these mismatches, a proper communication between prosumers (i.e., users with RESs that can either inject or absorb energy) and active users (i.e., users that agree to have their loads changed according to the system needs) is required. To achieve this goal, the centralized approach used in traditional power systems is no longer possible because both prosumers and active users would like to take part in energy transactions, and a decentralized approach based on transactive energy systems (TESs) and Peer-to-Peer (P2P) energy transactions should be adopted. In this context, the Distributed Ledger Technology (DLT), based on the blockchain concept arises as the most promising solution to enable smart contracts between prosumers and active users, which are safely guarded in blocks with cryptographic hashes. The aim of this paper is to provide a review about the deployment of decentralized TESs and to propose and discuss a transactive management infrastructure. In this context, the concept of Proof of Energy is proposed as a novel consensus protocol for P2P energy exchanges managed by DLT. An application of the proposed infrastructure considering a Virtual Power Plant (VPP) aggregator and residential prosumers endowed with a new transactive controller to manage the electrical storage system is discussed.
CitationSiano, P. [et al.]. A survey and evaluation of the potentials of distributed ledger technology for peer-to-peer transactive energy exchanges in local energy markets. "IEEE systems journal", Setembre 2019, vol. 13, núm. 3, p. 3454-3466.
URIhttp://hdl.handle.net/2117/190876
DOI10.1109/JSYST.2019.2903172
ISSN1932-8184
Publisher versionhttps://ieeexplore.ieee.org/document/8671697
Collections
Share: