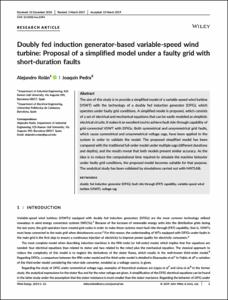 Document typeArticle
Rights accessOpen Access
Abstract
The aim of this study is to provide a simplified model of a variable-speed wind turbine (VSWT) with the technology of a doubly-fed induction generator (DFIG) which operates under faulty grid conditions. A simplified model is proposed, which consists of a set of electrical and mechanical equations that can be easily modeled as simplistic electrical circuits. It makes it an excellent tool to achieve fault ride-through capability of grid-connected VSWT with DFIGs. Both symmetrical and unsymmetrical grid faults, which cause symmetrical and unsymmetrical voltage sags, have been applied to the system in order to validate the model. The proposed simplified model has been compared with the traditional full-order model under multiple sags (different durations and depths), and the results reveal that both models present similar accuracy. As the idea is to reduce the computational time required to simulate the machine behavior under faulty grid conditions, the proposed model becomes suitable for that purpose. The analytical study has been validated by simulations carried out with MATLAB.
CitationRolan, A.; Pedra, J. Doubly fed induction generator-based variable-speed wind turbine: proposal of a simplified model under a faulty grid with short-duration faults. "Wind energy", Agost 2019, vol. 22, núm. 8, p. 1121-1133.
URIhttp://hdl.handle.net/2117/190873
DOI10.1002/we.2344
ISSN1095-4244
Publisher versionhttps://onlinelibrary.wiley.com/doi/abs/10.1002/we.2344
Collections
Share: