Initialization of DFIG wind turbines with a phasor-based approach 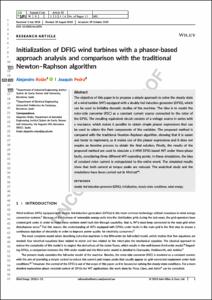 Document typeArticle
Rights accessOpen Access
Abstract
The objective of this paper is to propose a simple approach to solve the steady state of a wind turbine (WT) equipped with a doubly-fed induction generator (DFIG) which can be used to initialize dynamic studies of the machine. The idea is to model the rotor-side converter (RSC) as a constant current source connected to the rotor of the DFIG. The resulting equivalent circuit consists of a voltage source in series with a reactance, which makes it possible to obtain simple phasor expressions that can be used to obtain the Park components of the variables. The proposed method is compared with the traditional Newton-Raphson algorithm, showing that it is easier and faster to implement, as it makes use of the phasor expressions and it does not require an iterative process to obtain the final solution. Finally, the results of the proposed method are used to simulate a 2 MW DFIG-based WT under three-phase faults, considering three different WT operating points. In these simulations, the idea of constant rotor current is extrapolated to the entire event. The simulated results show that both current at torque peaks are reduced. The analytical study and the simulations have been carried out in MATLAB.
CitationRolan, A.; Pedra, J. Initialization of DFIG wind turbines with a phasor-based approach. "Wind energy", Març 2019, vol. 22, núm. 3, p. 420-432.
URIhttp://hdl.handle.net/2117/190872
DOI10.1002/we.2296
ISSN1095-4244
Publisher versionhttps://onlinelibrary.wiley.com/doi/abs/10.1002/we.2296
Collections
Share: