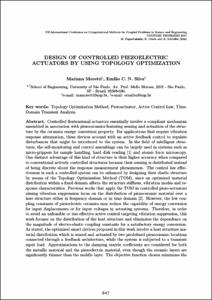 Show full item record
Moretti, Mariana
Silva, C.N.
Document typeConference report
PublisherCIMNE
Rights accessOpen Access
Abstract
Controlled flextensional actuators essentially involve a compliant mechanism assembled in association with piezoceramics featuring sensing and actuation of the struc- ture by the ceramics energy conversion property. For applications that require vibration response attenuation, these devices account with an active feedback control to regulate disturbances that might be introduced to the system. In the field of intelligent struc- tures, the self-monitoring and control assemblage can be largely used in systems such as micro-grippers for sample handling, hard disk reading [1] and atomic force microscopy. One distinct advantage of this kind of structure is their higher accuracy when compared to conventional actively controlled structures because their sensing is distributed instead of being discrete about the response measurement phenomenon. The control law effec- tiveness in such a controlled system can be enhanced by designing their elastic structure by means of the Topology Optimization Method (TOM), since an optimized material distribution within a fixed domain affects the structure stiffness, vibration modes and re- sponse characteristics. Previous works that apply the TOM in controlled piezo-actuators aiming vibration suppression focus on the distribution of piezoceramic material over a host structure either in frequency domain or in time domain [2]. However, the low cou- pling constants of piezoelectric ceramics may reduce the capability of energy conversion for input displacements or for input voltages in actuating systems. Therefore, in order to avoid an unfeasible or less effective active control targeting vibration suppression, this work focuses on the distribution of the host structure and eliminates the dependence on the magnitude of electro-elastic coupling constants for a satisfactory energy conversion. As stated, the optimized smart devices proposed in this work involve a host structure ma- terial distribution which is sensed and actuated by two predefined piezoceramic locations connected through a feedback architecture, while the system is subjected to a transient input load. Approximations to the damping matrix coefficients are considered for both the metallic material and the piezoelectric material, even though the ceramic layers are significantly thinner than the middle layer. The objective function chosen minimizes the vibration energy of the system subjected to a volume constraint. The dynamic equilibrium equation accounts with an extra damping matrix derived from the current amplification chosen as the feedback control law, or for short, the Active Velocity Feedback (AVF). The material model implemented is the Solid Isotropic Material with Penalization (SIMP) for the 4-node solid finite element with two mechanical degrees-of-freedom (DOFs) per node, and one electrical DOF per node. A density-based filter eliminates the checkerboard pattern, the sensitivity analysis is calculated by the adjoint method, and the Sequential Linear Programming (SLP) algorithm is employed as the optimization procedure. Two- Dimensions (2D) results are presented and the influence of the gain velocity value over the final layouts is analyzed.
URIhttp://hdl.handle.net/2117/190725
ISBN978-84-946909-2-1
Collections
Share: