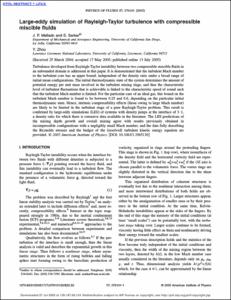 Sarkar, Sutanu
Zhou, Ye
Document typeArticle
Rights accessOpen Access
Abstract
Turbulence developed from Rayleigh-Taylor instability between two compressible miscible fluids in an unbounded domain is addressed in this paper. It is demonstrated that the turbulent Mach number in the turbulent core has an upper bound, independent of the density ratio under a broad range of initial mean configurations. The initial thermodynamic state of the system determines the amount of potential energy per unit mass involved in the turbulent mixing stage, and thus the characteristic level of turbulent fluctuations that is achievable is linked to the characteristic speed of sound such that the turbulent Mach number is limited. For the particular case of an ideal gas, this bound on the turbulent Mach number is found to be between 0.25 and 0.6, depending on the particular initial thermodynamic state. Hence, intrinsic compressibility effects those owing to large Mach number are likely to be limited in the turbulent stage of a pure Rayleigh-Taylor problem. This result is confirmed by large-eddy simulations LES of systems with density jumps at the interface of 3: 1, a density ratio for which there is extensive data available in the literature. The LES predictions of the mixing depth growth and overall mixing agree with results previously obtained in incompressible configurations with a negligibly small Mach number, and the data fully describing the Reynolds stresses and the budget of the resolved turbulent kinetic energy equation are provided.
CitationMellado, J. P.; Sarkar, S.; Zhou, Y. Large-eddy simulation of Rayleigh-Taylor turbulence with compressible miscible fluids. "Physics of fluids", 13 Juliol 2005, vol. 17, núm. 076101, p. 1-20.
URIhttp://hdl.handle.net/2117/190715
DOI10.1063/1.1965130
ISSN1070-6631
Publisher versionhttps://aip.scitation.org/doi/10.1063/1.1965130
Collections
Share: