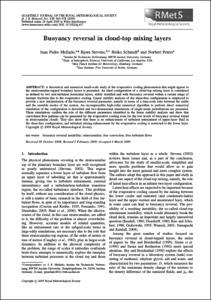 Except where otherwise noted, content on this work is licensed under a Creative Commons license : Attribution-NonCommercial-NoDerivs 3.0 Spain
Abstract
A theoretical and numerical small-scale study of the evaporative cooling phenomenon that might appear in the stratocumulus-topped boundary layers is presented. An ideal configuration of a cloud-top mixing layer is considered as defined by two non-turbulent horizontal layers, stably stratified and with buoyancy reversal within a certain range of mixture fractions due to the evaporative cooling. Linear stability analysis of the shear-free configuration is employed to provide a new interpretation of the buoyancy reversal parameter, namely in terms of a time-scale ratio between the stable and the unstable modes of the system. An incompressible high-order numerical algorithm to perform direct numerical simulation of the configuration is described and two-dimensional simulations of single-mode perturbations are presented. These simulations confirm the role of the different parameters identified in the linear stability analysis and show that convoluted flow patterns can be generated by the evaporative cooling even for the low levels of buoyancy reversal found in stratocumulus clouds. They also show that there is no enhancement of turbulent entrainment of upper-layer fluid in the shear-free configuration, and turbulent mixing enhancement by the evaporative cooling is restricted to the lower layer.
CitationMellado, J. P. [et al.]. Buoyancy reversal in cloud-top mixing layers. "Quarterly journal of the Royal Meteorological Society", 28 Abril 2009, vol. 135, p. 963-978.
URIhttp://hdl.handle.net/2117/190714
DOI10.1002/qj.417
ISSN0035-9009
Publisher versionhttps://rmets.onlinelibrary.wiley.com/doi/abs/10.1002/qj.417
Collections
Share: